Have you ever rubbed your erection up against a sleeping person and begun groping them? If you answered 'no' then you're doing better in life than my ex-friend, the protagonist of this game.

A short interactive story about my experience with fuzzy boundaries and the grey areas surrounding consent. Spoiler alert: You should always ask before touching someone in a sexual way, especially if they are sleeping.

This game was showcased at the Freeplay Independent Games Festival 2018.

If the content of this game has affected you in very negative ways please consider reaching out to local sources of help. Here in the UK a reliable helpline is: https://www.samaritans.org/how-we-can-help-you/contact-us

If you would like to learn more about consent:

#WhyIDidntReport (I have since reported the incident, but I'll keep the hash tag as it took years of courage to come forwards.)

Want to give back? Buy me a coffee! https://ko-fi.com/laurieraye

A Chaotic God15 days ago

I'm sorry this happened to you. Thank you for sharing your experience and spreading awareness. No one should have to go through any type of sexual assault.

I hope you are doing better and have a nice day.

Thanks for giving us the opportunity to listen to what happened in an accessible format. It was grim but digestable and made a really clear dialogue. Consent is so important!

Thank you for making and sharing this.

This sounds a lot like something that happened to me, and reading through it from an outside perspective was really cathartic.

You're brave for sharing this in this way. I'll get better too.

I hope you have recovered well enough to live happily once again.

Thank you for sharing this experience with me.

I am living a very full and happy life.

Thanks for the effort of creating this experience.

As I was playing it, I have remembered many moments of my life in which communication was failing. Many times I would have loved to be able to pause things, think carefully about what was happening.

You threw some light on these old confusing moments. Thank you.

I replayed the game multiple times, basically taking it in degrees - I started out by leaving Amy alone, and then my next time I left it alone after the hug, and so on and so forth. It was an unpleasant and impactful surprise when the player character continued to go forth anyway without me choosing for them to do so. It sort of emphasized the non-consensual atmosphere and made it go both ways, to Amy and to the  player (although of course having a video game character not listen to my input is nowhere near the same experience as being raped).

I also just want to mention that the phrase "You can try to rape me again if you like" really drove it all home for me. It's one thing for a character I'm controlling to rape "someone" but it's on another level to rape "you," never mind making multiple attempts at it.

This is a really thoughtful comment, thank you so much for playing. I think you picked up on a lot of what I was hoping to achieve. There is a point where sexual assault has already happened, and after that it's no longer possible to get a 'good' ending. It's not supposed to be a pleasent game (but I'm hoping that future game attempts will be more light hearted!)

Thanks for your feedback!

I was not prepared to have to explicitly choose all of this.  For some reason the series of things just has my whole person going "Don't even think about, man! There might be a story there, but at why's cost?!"

Well. While I'm still not sure what would happen if I tried anything, Amy is safe in bed and sleeping contently.

(Aka. I couldn't bring myself to do that, even fictionally. : P)

Heh, this is something which is happening to my friends too. They are excited for my game but a lot of them have their own traumatic experiences so can't actually play it!

It's supposed to be hard to make these choices, so in a way I'm glad you're not finding it easy to play. You got the best ending, though, so go you! And thanks for the feedback.

Thank you so much!

As a game, this is great and it is thought provoking.  My feelings on this are obviously going to be different from yours, though.  Trying to fit in with your friend does not fit the definition of coercion.  If you are uncomfortable in a situation it's your responsibility to bail.  You did as much of a disservice to your friend by consenting, because some guys are not very adept at understanding body language and double meanings.  When you say yes but you clearly mean no, that is going to be a huge problem for someone who already expressed to you that they have trouble with just this sort of thing!

Thanks for your feedback! Some clarifications: They were not a man.  They did not express that they had any trouble with body language and double meanings. There is more to the story here, which the game doesn't get into. An example of a time when people say 'yes' to sexual contact which is coersive would be if there was abuse involved or fear of punishment in some form. I have been around people who make sure to get verbal consent (for non-sexual assault situations) through intimidation and fear, and then use that verbal 'consent' as a gaslighting tool.

I would categorise that friendship as abusive. This person knew exactly which boundaries to walk right up to, and which they could cross. I don't think they planned on me waking up. "uncomfortable in a situation" etc is a far cry from "woke up to sexual assault".

I would say that it is not always the responsibility of someone to bail when they are uncomfortable - purely because some people cannot bail when they are uncomfortable. There's a great book called 'Ask: Building consent culture" which talks about this, and a famous book about date rape called "I never called it rape" by Robin Warshaw which is based around this issue too.  Recommended reading if consent is an issue you want to explore!

Thanks for playing though, this is great feedback and I'm glad that conversations about consent are happening around this game.

Oh also! You might benefit from looking at the definitions of consent and coercion on this website: https://www.yesmeansyes.com/consent

"Consent is a mutual verbal, physical, and emotional agreement that happens without manipulation, threats, or head games.

Consent is a whole body experience. It is not just a verbal “yes” or “no” – it involves paying attention to your partner as a person and checking in with physical and emotional cues as well.

Consent is also mutual (both people have to agree) and must be continuous. You can stop at any time, you can change your mind, and just because you said yes to one thing doesn’t mean you have consented to anything else."

Thanks for replying!  You know, you make some really valid points and I feel really ill-equipped to debate this with you any further, nor would I want to because I now find myself thinking about this a lot differently.  You seem to have devoted a lot of time not only to processing your experience but also evidently giving the subject a scholarly treatment.  Thanks for making such an interesting and intruiging game, and for also taking the time to discuss the sensitive subject it covers.

No problem! I like having these kind of conversations and I'm always happy to talk about consent stuff. Thanks for taking the time to interact and leave your feedback, much appreciated. 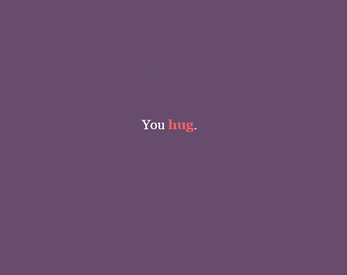